Hippie. Preppie. Popular. Loner. Freak. Geek. I was all of those things at one point during high school. Except popular… I just tagged along with the cool kids for a while. Which was fine, because in my high school, the cool kids tended to have the personalities and suntans of a Cheez-It. They looked like models for a JC Penney catalog. The guys drank cans of Busch and got wasted. They bullied , they date raped, they high-fived. The girls were even scarier. For more, just watch Season 1 of Veronica Mars and…That.

One beautiful Sunday afternoon in mid-winter, the kind of respite that reminds you spring will arrive at some point, I drove to the park down the street from my house to get some fresh air and smoke a cigarette. I leaned on the hood of my car and watched some kids play softball from afar, puffing away.

A rusting Camaro zipped down the gravel path where I sat and screeched to a stop next to me.

I’d never seen this kid in my life. His big smile showcased teeth that were too small for his mouth and his nest of curly brown hair flopped into his eyes. He wore a faded The Cure t-shirt with holes in it, exposing a hairy belly. He flicked his own cigarette out the car window.

“Cool car. Can I bum one of those?” he asked, nodding toward my pack of cigarettes.

I handed him a Marlboro Light, and he nodded in approval.

“You’re the girl who wants to go to the formal with Charlie Knox,” he said.

I tilted my head, still not offering confirmation.

“I’m friends with Summer, she told me” he said. “And Charlie’s my best friend. I’m Bob.”

“Hi,” I finally offered, stubbing my cigarette out with my sneaker while thinking of ways to murder Summer. “I’m Wila.”

“Charlie’s actually at my house right now. We’re gonna watch the Flyers. Want to come over?”

I hadn’t told my dad where I was going, but it was early and he wouldn’t start to get worried for another few hours, if even then. My dad’s grip on the reins had loosened up substantially once he started dating and had a life of his own to manage. He hit up happy hours and went to cool new restaurants for dinner. He hung out with friends and went to movies. At 43, he finally found an opportunity to experience his 20’s without the responsibility of young children and a wife. He seized it. Hence, my teenage freedom.

I followed Bob to his house, which sat at the end of a street were my friend Jenna lived. While most of the houses in the neighborhood had expansive back yards, Bob’s butted up against a forest, an army of naked trees stripped by the unbearably long winter.

We walked in the side door, which opened into a family room that smelled of dog, cigarettes, old farts, and lasagna. Piles of embroidered pillows touting comforting phrases littered the sofas and chairs. 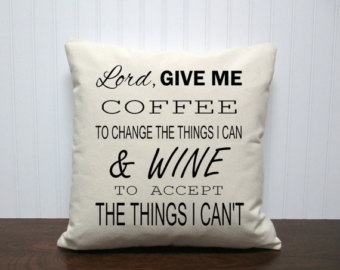 The walls were plastered with photos of people I had never seen before, all smiling with their big mouths and little teeth for the camera. Charlie, my IRL Jordan Catalano, sat next to another guy on the couch playing a hockey game on a Playstation.

A big woman clanked pots and pans in the kitchen. Bob’s mom. She came out of the kitchen and bear-hugged me while somehow pushing a plate of food into my hand.

“Hi, honey!” she sang in big, high pitched voice that indicated we’d known each other for ages. “Sit down, eat!”

No questions. No skepticism. I racked my brain trying to think of the last time as a teenager I’d been welcomed by an adult without a healthy amount of trepidation. Bob’s mom had just pole-vaulted her way to the top of my Favorite Adults Ever list, where she would remain until the end of time. And to think: I didn’t yet know about her lax policies on teenage-liquor-drinking and cigarette smoking in the house.

We watched the Flyers game, the guys pretty much ignoring me. They occasionally whooped over a play and commented on something that happened on screen. Someone may have high fived me at some point. I realized that Bob and Charlie both played on our high school’s varsity hockey team. For the most part, I sat quietly and observed the room, making my exit at the end of the second period.

“Nice to meet you, Wila. You should come hang out again tomorrow,” Bob said.

Charlie and the other guy on the couch, who looked like he could be Bob’s older brother, nodded in agreement.

I drove home to an empty house. No worried dad, no foul. It had been a good Sunday, a thing I never fully appreciated as a kid. Sure, I had school on Monday. But that didn’t cause any of the crippling work destression known as the “Sunday Sads” that I’m far too familiar with as an adult. Instead, I enjoyed the contentment of finding some new people to add to my hang out roster.

Bob, Charlie and I ended up becoming pretty good friends. We were basically a less-good-looking version of beloved launch-pad sitcom Two Guys and a Girl. Charlie took me to the formal, even though he had a girlfriend at the time1, and we dated on and off for a couple of years. It was really more of a “friends with benefits” thing, but that wasn’t an established relationship status back in 1993. Bob and Charlie had a bunch of guy friends from the hockey team and the hippie/druggie scene that I got to know pretty well. And my girlfriends started making more and more appearances at Bob’s house, too, since a lot of Bob’s friends were hot.

Jenna, my friend who lived down the street from Bob, became a regular at Chez Bob, despite the fact that her house sported some pretty excellent unmonitored top shelf liquor, a trampoline, and a basement that rivaled Eric Forman’s.

She started seriously dating one of Bob’s good friends from another school, and that was that.

Before anyone knew it, we had a full-on crew2.

One Saturday afternoon the summer after my Freshman year of college, I sat on Bob’s couch smoking a Parliament light while Bob’s brother lit his farts on fire to entertain the various jocks and potheads in the room. Jenna shuffled into the house and slumped next to me.

“Somebody stole our trampoline last night,” she said. “My little sister is devastated.”

“Seriously,” I chimed in. “How the hell does someone steal a trampoline? That thing is massive!”

“I know,” Jenna said. “I just don’t get it. And nobody in my house heard a thing. It was there when I got home from the movies last night and this morning – poof! – it was gone.”

Our squad crew put our years of watching cheesy detective TV shows to use and speculated who could have stolen the trampoline. Half our former classmates lived in Bob and Jenna’s neighborhood and the majority of those were derelicts – any of them could be the culprit. One of Jenna’s sisters also went to our former high school. Surely she had made some frenemies who would want to steal a trampoline.

One of the hockey players who had failed senior year and still proudly represented East High School suggested that there could have been a wind storm that blew the trampoline away. He was a regular Lennie Briscoe.

None of the conspiracies we came up with got any traction, but all the theorizing had made the guys hungry for chicken fingers. Pushing thoughts of the trampoline aside, we piled into a couple of cars and went to everyone’s favorite West Chester hang out, The Stadium Grill.

After annihilating Bob at a competitive game of Hoop Fever, I walked back over to the table, where a few others had joined our group. Charlie and two other former jocks sat at the table, eating fries, while Jenna told them about the Case of the Missing Trampoline.

We watched the Phillies game for a while and nattered about the usual: sports, the girls my guys friends wanted me to hook them up with, and who was going to attempt to buy beer with their fake ID. The guys also mercilessly teased Charlie, who had fallen in the shower and fractured his ankle.

“I always knew you wanted to drop the soap!”

“I’ve seen the shower in your apartment, Knox, and you better pray you didn’t get no bacterial infection from touching the floor. I wouldn’t even take a shit in that thing,” said Kevin. Ah, classy Kevin.

“Ooh,” Smithy said, “Why were you checking out Knox’s shower, Kev?”

And on and on it went.

Charlie and I were in an “on again” phase, so after everyone else trickled out of The Stadium Grill and went their separate ways, he, Bob and I went over to Charlie’s apartment to hang out for a while.

Run-Around by Blues Traveler played on the stereo as Bob rifled through the fridge to grab some beers.

“You guys can cut the bullshit now,” I said. “I know you stole the trampoline.”

In reality, I only had a hunch. It was a little too coincidental that Bob lived just down the street from Jenna and that Charlie was gimping around on a broken ankle.

Bob, the best strip poker player I’d ever met, called my bluff. “What are you talking about?”

Unfortunately for him, Charlie, as sharp as a marshmallow, simultaneously said, “How’d you find out?”

They spilled the full story about how they’d gotten wasted the night before. Apparently a House of Pain had come on the radio, inspiring the heist.

They’d stolen the trampoline, and not knowing that the safest way to jump on a trampoline is without shoes, they drunkenly stagger-bounced for two minutes in their Timberland boots before Charlie broke his ankle, toppled off the trampoline, and got whisked to the hospital by Bob’s mom.

“Two things…” I said. “How did you get the trampoline to your house…and where is it now?”

“It was actually pretty easy. We just flipped it over and balanced it on the roof of Smithy’s car,” Bob said, chin jutting up with pride. “I mean, we only had to drive it about 100 yards.”

“And after I broke my leg, Bob and his brother dragged it out in the forest behind the house to hide it.”

The trampoline mysteriously reappeared in Jenna’s backyard the next night, her parents forever clueless about where it had gone and who had taken it…and almost certainly secretly wondering why the thief had brought the goddamned lawsuit-waiting-to-happen back. I told Jenna the truth, of course, and she applauded my sleuthing skills and laughed about the guys’ drunken antics. But her parents and little sisters didn’t have to know that.

2 crew
/krōō/
noun
1. a group of people who worked together in the time period pre “squad”
2. a type of turtleneck far too popular in the 80s and 90s