Growing up in my family, I became familiar with two types of critters: those that we feared and those that we adopted. One such critter, Madeline, happened to fall into both categories.

My family always had pets. The week I was born, my parents also took in a stray cat from the neighborhood.

Other pets during Sox’s tenure as king of the house included several hamsters with the lifespan of a gnat, goldfish galore whose lifespans ran even shorter than the hamsters’, and a guinea pig named Sunshine, who suffered from agoraphobia.

Sox, the most patient pet ever.

Me and the reclusive Sunshine – in one of his rare appearances outside of his cage.

After Sox went to the big catnip farm in the sky, my dad insisted that we only adopt female cats from now on. The spraying had been a big-time problem. So, for my 8th birthday, my dad plunked me in the car and we drove to the SPCA to pick out my next beloved house pet. Unfortunately, it wasn’t exactly kitten season, and the Chester County SPCA offered a limited selection. I stared at the literal pile of cats in front of me and asked the volunteer at the shelter:

“Are any of these kittens girls cats?”

Sure enough, one was. SPCA lady plucked the kitten who was in the process of clawing its way to the top of the pile and handed her to me. She was beautiful, all white except for two spots on her head and a striped tail.

“This cat is called Madeline,” I said, as I tightly clutched the furball.

Appearances can be deceiving. Pet at your own risk.

I petted Madeline’s head tenderly as my dad drove us home. She purred with delight. That was the last time she was nice to anybody. The minute we got to the house, she transformed into the hellion she remained for the next 23 YEARS OF HER LIFE. As they say, only the good die young.

During her very eventful nine lives, she:

As one who believes that when you commit to adopting an animal, they are part of the family forever, we had no choice but to keep Madeline and give her as much love as we dared. My arms thick with scar tissue, I found the fortitude to dress her up in Cabbage Patch Kids clothes on one occasion. (For that, I am deeply sorry. But not really; it was pretty adorable.) 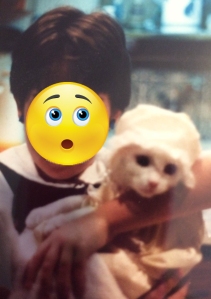 Who needs a Cabbage Patch Premie when you had a helpless pet?

And, there was one year in which she curled up in the pumpkin that I used to collect candy in when I went Trick or Treating on Halloween, which was poster-worthy  cute.

Aside from those fleeting moments, though, she was a nightmare and she terrorized all inhabitants of my parents’ house long after I moved out.

We adopted Teddy, our first family dog, when I was about 9 years old. Teddy was a supersized version of a Miniature Collie. His full name was Theodore Calvin Bear, aka TC, aka Teddy Bear.

Everybody named a pet after a character from an 80’s detective show, right?

Teddy loved two things: food and me. The Secret Service could have learned a few things from this dog. He protected me like I was made of solid gold. Or in his currency, Beggin’ Strips. One night at dinner, my dad and I ate the steaks he’d cooked on the grill. After I began emitting a gurgling noise and pointing wordlessly at my thought, my dad leapt to the logical conclusion that I was choking. He threw me over one of our kitchen chairs in an effort to give me the Heimlich Maneuver. Teddy, though, was not certified in CPR or first aid, and he thought my dad was attacking me. Teddy ferociously clamped on to my dad’s leg. My dad released his grip on me and limped across the kitchen, trying to get the unshakable dog to remove his teeth from his thigh. It was quite a scene. If I had actually been choking, Teddy’s “protection” would have been the nail in my coffin. But as it was, my dad ended up with a bloody, bruised thigh, and I had a hunk of steak lodged in my esophagus.

Teddy’s BFF ended up being a hulking orange cat we adopted. Tigger was pretty much the sweetest, most loving animal that ever walked the planet.

He purred constantly and loved soaking up affection. The sign on his cage at the SPCA said name was “Princess” and that he was “Incredibly Affectionate.” Even while behind bars in the depressing animal shelter, he purred and beamed. At a whopping 20 pounds, he would bound around our house like he was a a dog. He’d play fetch or hide and seek with me and Teddy. Tigger had a cat version of Progeria and went to sniff flowers in kitty heaven a short three years after we adopted him. He had a short life, but it was a happy one. I learned a valuable lesson about adopting animals from Tigger – don’t look for “cute,” go in and ask for the most affectionate animal in the place.

Tigger, checking out the scene.

Other childhood pets included a duckling that I found at the beach. His name was Harold until I realized he was a girl. Then we called him Haroldine. Haroldine sat on my lap while I read books, and she loved swimming in our pool, except when she got sucked into the filter. I took her back to live with the ducks at the beach the next summer and she was accepted right away, because she had the hook up when it came to getting delicious pieces of bread.

Haroldine, after she recuperated and I sent her off to rejoin her duck squad.

For a brief time, we had two rabbits, Cinnamon and Licorice. They were sweet, they were soft as silk, and they were about as boring as it gets. Madeline had her eye on them, and they were adopted by a family friend before she had an opportunity to turn their cage into a crime scene.

After Teddy passed away, my dad and stepmom got a new puppy. Sydney was incredibly smart, incredibly high strung, and incredibly sneaky. She somehow got her overbite on some snacks that I had in a plastic snack box, zipped up in a backpack, which was behind closed closet doors. Sydney also had a lot to say – she would go outside and yap her shrill bark incessantly, eventually losing her voice. The cops showed up on our doorstep on more than one occasion because a neighbor had called in a noise complaint. Ah, the suburbs. In the city, I hesitate to call the cops and waste their time when a fight breaks out on the street unless there are weapons involved.

Finally, my parents adopted Zack, another Miniature Collie. He was fluffy, cute, and incredibly dim-witted. He loved food, and feared hardwood floors. He also liked to vocalize his thoughts.

Zach, taking a break from yapping to beg for food.

Needless to say, there was lots of high-pitched barking in stereo. I moved out of my parents’ house shortly thereafter.

I adopted Yoda during my senior year in college. My roommate and I had wanted to get a pet cat Freshman year, but we had to wait to move off campus. Finally, as seniors living in an off-campus row house (that would be condemned the month after we moved out), we could achieve our dream of becoming crazy cat ladies at the young age of 21.

She and I cut class and trekked out to the SPCA to get us some kittens. She instantly went for the tiniest, cutest cat in the joint. I, on the other hand, said “take me to your nicest animal.”

Yoda and Skittles joined us in our unkempt abode. My room was on the 3rd floor, in the attic. There were narrow steps that went up, with a half wall on either side. After approximately three minutes of sniffing around and exploring his new domain, Yoda made a leap to take a look at what was on the other side of that half wall. He found out the only thing there was a long fall to the bottom of the steps.

Before I even had a chance to run over and see if he was alright, he scampered up the steps at light speed and scurried under my bed, where he stayed for two days straight. Thankfully, it turns out the only thing that was hurt was his ego.

Yoda was the Scooby to my Shaggy for the next 15 years. My longest live-in relationship. We had ups (like when we lived back at my parents’ house, which was practically a palace) and we had downs (like when we lived in a tiny sliver of an apartment in Center City, where we both went a little stir crazy). But through it all, we always had each other. 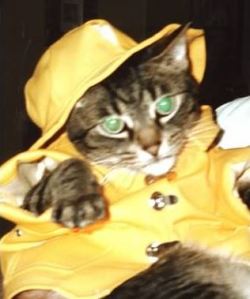 I’m so sorry, buddy. In my defense, I didn’t dress you up, I only took the photo.

Always a sucker for advertising, this makes me think of Yoda every time I see it [tissue recommended]:

Next time: more about the critters we didn’t adopt.

One thought on “A love letter to my people, and by people I mean animals”